During the matches, employees of state companies plan to look for new partners in the stadiums' lounges and strengthen ties with existing partners.

On the state procurement website, there are 13 tenders for the purchase of tickets for World Cup football matches, which will be held in 11 Russian cities in June-July 2018. The total amount paid by state companies for tickets amounted to 204.4 million rubles. (about $ 3.3 million). The most popular among state companies was the match France - Denmark, which will be held in Luzhniki on Tuesday, June 26 - 81 tickets were bought for it.

The main seller of tickets for state contracts is Match Hospitality, a Swiss partner of FIFA, through which "hospitality packages" are realized - VIP seats and lodges in stadiums.

The largest buyer of tickets for the World Cup 2018 through the site of state purchases are the structures of VTB - VTB24 (purchases were announced prior to the merger with VTB) and VTB Insurance, according to the state procurement portal. The VTB24 contract for the purchase of tickets for more than $ 1.5 million was signed at the end of 2016. Under the contract is the signature of the then-deputy chairman of the board VTB24 Mikhail Kozhokin.

As follows from the appendix to the state contract, for this money VTB24 purchased from Match Hospitality an elite package "Big Three 07". A total of 20 similar packages have been on sale, each of which entitles to attend 19 world championship matches that will be held in Moscow and St. Petersburg, including the opening match, both semifinals and the final. The buyer receives at his disposal his own box at the stadiums. The ticket price includes restaurant service, a bar, parking at the stadium, souvenirs and services of personal hostesses. 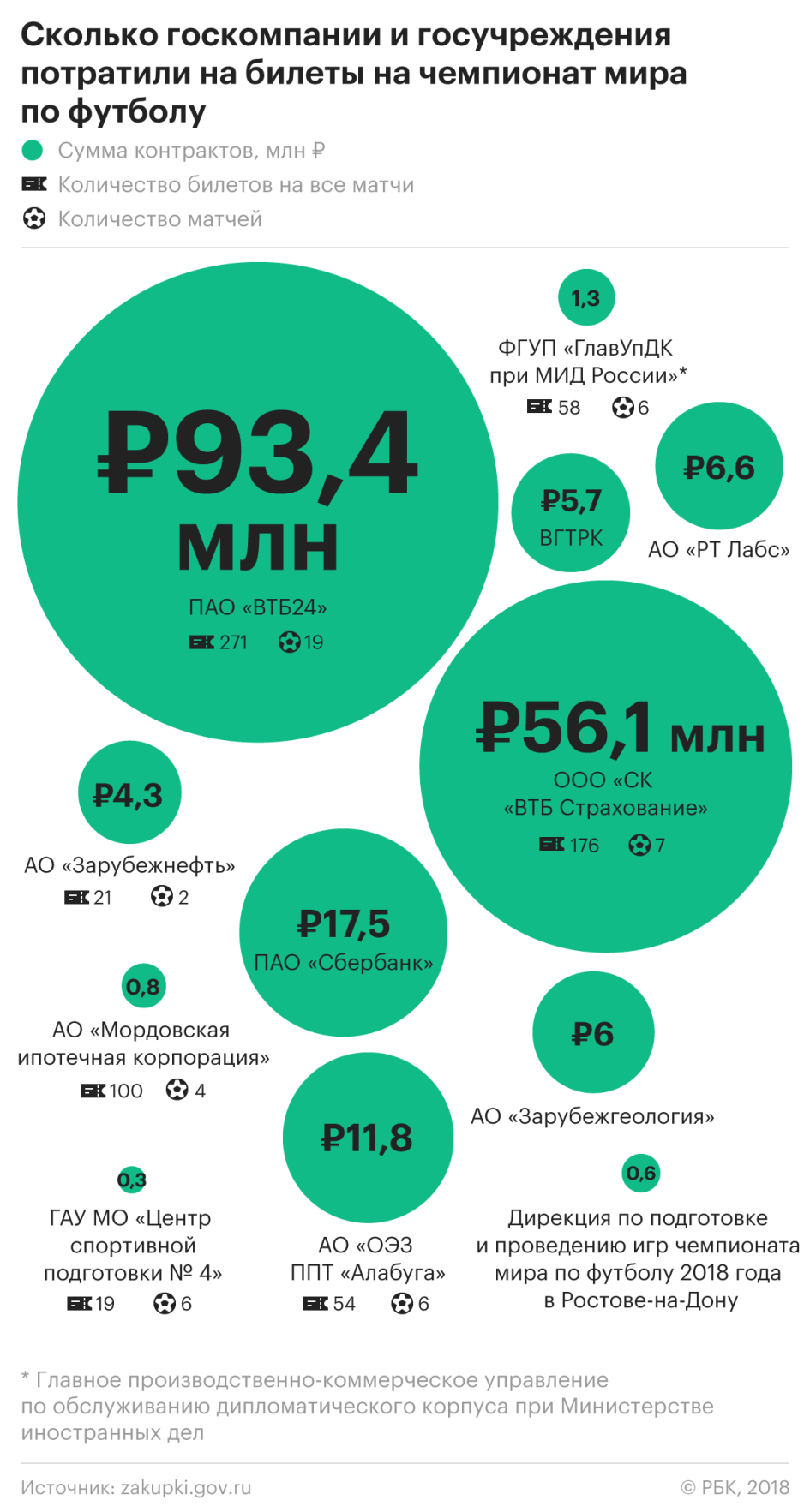 The company "VTB Insurance" spent on football tickets a little less than a bank - $ 997.8 thousand. For this amount, the insurers bought a box in Luzhniki for 18 people for all games, and also purchased four tickets for VIP seats for the semifinals and the final, which will also take place in the Luzhniki stadium, and six seats in the Luzhniki Tsar's Lodge for all matches. The contract was signed by the first deputy general director of VTB Insurance Mikhail Motorin.

Tickets for the 2018 World Cup were purchased for entertainment purposes - organizing events with key customers and partners, explained RBC in the press service of VTB.

Work with especially important clients during the World Cup games will be conducted by Sberbank, which bought tickets from Match Hospitality for 17.5 million rubles. As part of the loyalty program for large customers, the bank organized the purchase of hospitality packages for World Cup matches in football, RBC told the bank's press service. "Sberbank pays great attention to building and maintaining partnerships with customers. Informal communication, sports and other events bring together the positions of decision makers in companies. Large customers are an important segment for the bank. Relationships with them determine the success of joint business of the bank and customers, as well as the development of entire areas of financial services and economic sectors, "the bank noted.

The management company of the special economic zone "Alabuga" (owned by JSC "SEZ" and the Ministry of Property of Tatarstan) bought a box for 9 seats at a stadium in Kazan for 12 million rubles. In support of the purchase, Alabuga managers indicated that the purpose of the work is to promote the SEZ brand, attract potential investors and increase the attractiveness of the economic zone for domestic and foreign investment market players. In Kazan, there will be six World Championship matches in which teams from Iran, Spain, Poland, Colombia, Korea, Germany, France and Australia will play.

Among the concluded contracts for the purchase of tickets there are also point tickets. So, Zarubezhneft, which concluded a major contract for oil production in Iran in March 2018, bought a box for the match between Spain and Iran, which will be held in Kazan.

GlavUpDK at the Foreign Ministry, engaged in servicing foreign diplomatic representations in Russia, bought tickets for six Moscow matches. At the same time, four of them bought two tickets to the VIP zone, and the game France - Denmark in the "Luzhniki" - 32 tickets.

"Top managers of large companies often purchase VIP tickets for the World Cup matches for their own money," RBC told a representative of a large concierge service specializing in serving VIP clients. - In addition to the expensive lodges, Match Hospitality has VIP seats that provide the same range of services as in the lodges - restaurant service, VIP parking, etc., there were a lot of such private orders from well-known customers before the World Cup " .

Director of Development of the international company Quintessentially, specializing in concierge services (service reservation service), Kirill Ryabkov told RBC that there is more excitement around the World Cup than during the Sochi Olympics. "For us it was a surprise that from all over the world there is a huge demand, especially for the semifinals and the finals. If compared with the Olympics-2014- this is incommensurable, there were single requests. Now the requests are counted in hundreds, "Ryabkov said. 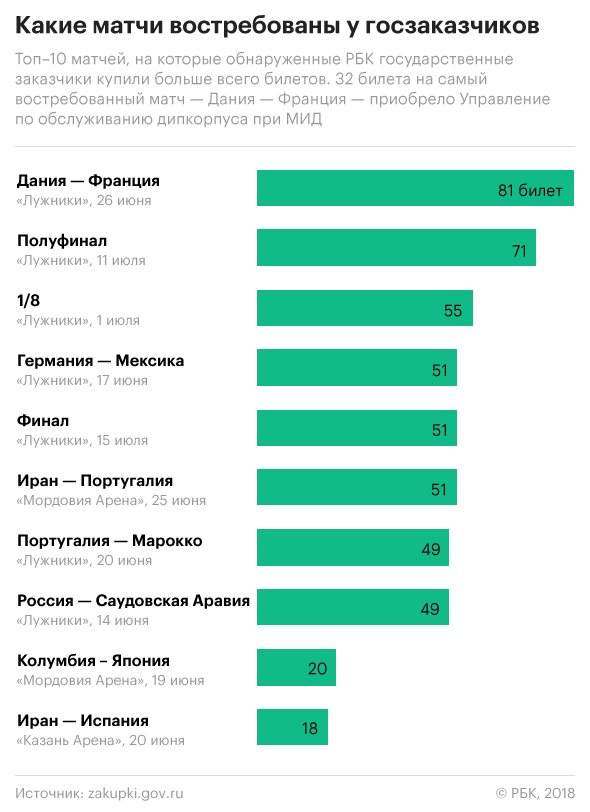 According to him, on average, one person buys about 30 tickets, as well as flights, transfers, lodging, dinner, leisure, individual excursions, including renting boats on the canals of St. Petersburg, going to theaters and so on. Ryabkov noted that now his service has sold about 700 tickets, one hundred of which - for customers from Russia.

Most complete and detailed list of all companies and organizations in Massachusetts, USA, on the site http://massachusetts.all-usa.org/ will help you to provide your business.

In Match Hospitality, RBC told that the sale of hospitality packages went well - the demand for them was high. Nevertheless, some packages are still being sold. According to the representative of Match Hospitality Imran Patel, buyers from Russia purchased from the company 38104 VIP-package. The names of buyers Patel did not disclose, referring to the confidentiality of information. Among the most active buyers of VIP packages are citizens of Argentina (16961), Mexico (15158), USA (9909) and China (9113).