International Industrial Bank, often abbreviated in Russian as Mezhprombank, is one of the largest Russian banks founded in 1992 by Sergey Pugachyov and Sergey Veremeyenko.

On July 6, 2010, IIB failed to pay €200 million in maturing eurobonds. The bank is in discussions with bondholders, the Central Bank of Russia, and depositors to stabilize its deteriorating liquidity position. On 30 November 2010, a Moscow court declared the bankruptcy and the insolvency of this bank.

Sergey Pugachyov, in the past a member of the Federation Council of Russia representing Tuva, had been the Chairman of the Board of Directors of Mezhprombank until January 2002. 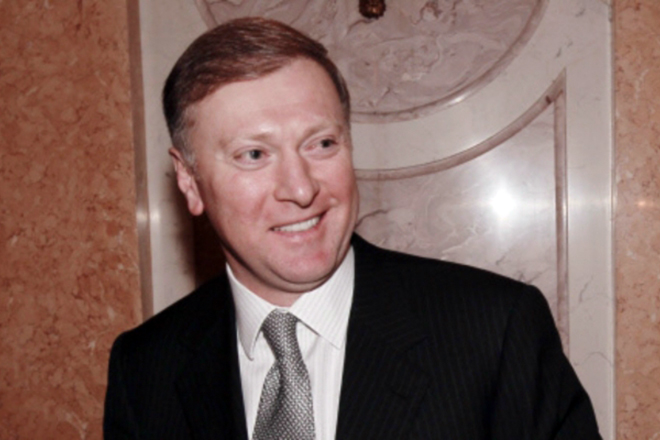 Musa Yusupovich Bazhaev (born on May 11, 1966 in Grozny, the Chechen-Ingush ASSR) is a Russian businessman of the Chechen origin. In 1991, he graduated from the Grozny State Petroleum Institute with a degree in chemical technology of oil and gas refining. He's currently the President of OJSC Alliance Group since March. Mr. Bazhaev served as President and Chief Executive Officer of West Siberian Resources Ltd. He served as Chief Executive Officer and President of Alliance Oil Company Ltd. He serves as Chairman of the Board of Directors at Russian Platinum, PLC.

At the disposal of the Russian law enforcement agencies there are materials testifying to the existence of an unresolved shadow conflict between Michael Cherney and the Bazhaevs family controlling the Russian Alliance Group. This conflict dates back to the early 1990s and is associated with the division of a billion dollars stolen from the Central Bank of Russia by an unidentified criminal group through a series of large-scale fraud with false letters of advice.

How Hogan Lovells made millions on runaway Sergey Pugachev

The DIA has already paid lawyers almost half of Mezhprombank's bankruptcy estate.

Ex-Senator asks the Supreme Court of the Russian Federation to revoke the decision to recover from it 75 billion rubles.

RBC remembered which Russian bankers had already left the country after their banks had difficulties.

Now the villa in the Caribbean and other property of the ex-senator can be seized to repay the debts of Mezhprombank.

After the decision on Pugachev, hiding assets will become more problematic

Banker Sergey Pugachev, who hid assets in New Zealand trusts, was recognized by the court in London as their beneficiary. The precedent decision of the court will allow the DIA to seize the businessman's expensive real estate in England, France, Switzerland and the United States.

The financial scarecrow for banker Pugachev

The Deposit Insurance Agency is trying to get its hands on the runaway billionaire Sergei Pugachev in the UK. The DIA is trying to prove that the businessman hid the capital in the trusts. Will the oligarch manage to save money, and who had helped him to withdraw it?

The manor of the founder of Mezhprombank, Lower Venn Farm XVIII, was sold for 1.6 million pounds.

In an exhausting judicial war waged in the West between the Russian authorities and banker Sergey Pugachev, a turning point was the battle that can radically change all future wars for assets.

The founder of Mezhprombank and his lawyers traditionally do not know anything about it.

Yacht instead of a bank: Transportny shareholder was the owner of the yacht worth €55 million

Financier Alexander Mazanov, a shareholder of bankrupt Transportny and Interkommerts banks, put up for sale a yacht worth more than €55 million. The "hole" in the credit institutions exceeds 120 billion rubles.

Sergey Pugachev — RBC: "Perhaps, I'd rather stay at home"

The verdict to Sergey Pugachev will be announced by the High Court in London on February 11; the fugitive businessman can be convicted to two years in prison for contempt to court. Pugachev tried to convince RBC that the court decision does not threaten him.

Not only the Russian, but also the British police now seeks the arrest of the founder of Mezhprombank, former senator Sergey Pugachev. Pugachev faces up to two years in prison in the UK.

The founder of the International Industrial Bank Sergey Pugachev has filed a lawsuit against Russia for $ 10billion. The document was sent to the Permanent Court of Arbitration in The Hague. This information was confirmed by the businessman's representative to RBC.

He is a citizen of France now, says his representative.

Put in a word for the poor banker

Sergey Pugachev's assets have been left under arrest.

The trust which faltered

Sergey Pugachev's assets could not withstand the London court.

The founder of bankrupt Mezhprombank and former Senator Sergei Pugachev, who was arrested in absentia in Russia, in an interview to Financial Times British newspaper said that the Russian economy is transformed into a feudal system, and businesses own their assets only in name, while actually being "the serfs" of Vladimir Putin, the country's president.

His potential losses from legal proceedings with ACB are estimated at $ 25 million.

Sergey Pugachev will be held responsible in London for the collapse of Mezhprombank.

Sergey Pugachev will not be arrested even in absentia

The Moscow City Court upheld the decision of the Basmanny Court