Ministry of Finance of Russia 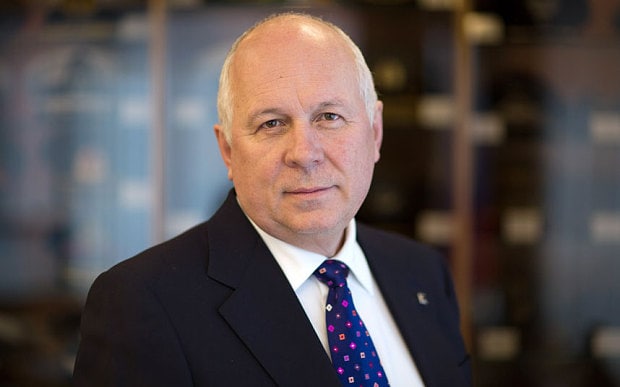 Sergey Viktorovich Chemezov (born August 20, 1952, Cheremkhovo, Soviet Union) is CEO of Rostec Corporation (formerly the Director General of Rosoboronexport), and a lieutenant-general. In addition, he is the Chairman of the All-Russian Public Organization - Russian Engineering Union, as well as President of the All-Russian Industrial Association of Employers - Russian Engineering Union.

Chemezov is a member of the commission on military-technical cooperation between Russia and foreign states, through which he actively advocates for Russia to maintain and strengthen its position as the largest player in the global market for military products.

Chemezov is an influential part of an elite group of former spies and security men known as the Siloviki. Closely identified with one of the Kremlin's shadowy siloviki clans, was appointed by a presidential decree on November 26, 2007 as the Director General of Rostec. He holds a military rank of Colonel general. Chemezov is a trusted ally of President Putin, whom he has known since the 1980s when they lived in the same apartment complex in East Germany.

The bank will pay a $ 16.2 million fine for hiring officials' children in exchange for government orders.

Depositors are disappointed in Russian banks

In September, the outflow of depositors' money from the Russian banking system amounted to over 500 billion rubles.

After the proposal of Andrei Belousov metallurgists and chemists to shell out for 513 billion rubles, his initiative was not supported by the RF Ministry of Finance. With the condition that the company invests this money all the same in Russia.

In 2017, the Ministry of Finance of Russia will purchase foreign currency for a record amount of 2.7 trillion rubles. This is almost 3 times more than the country spends on medicine and education.

Formally, spending on science at large in purchasing power parity is almost 40 billion dollars (in reality an order of magnitude less) smeared by a thin layer of approximately 430,000 scientists and aimed mainly at developing new types of weapons.

According to the head of Sberbank, oil companies may not give 800 billion rubles in loans to Russian banks that were taken to modernize the refinery. Sberbank has already issued 455 billion rubles for these purposes.

The government of the Russian Federation for damages of 537 million dollars from American duties on aluminum and steel responded with restrictions on US imports of $ 93 million.

In the game of exchange rates, the bank of Mikhail Fridman and Pyotr Aven was generously helped by the state budget of the Russian Federation, which granted a loan of 77 billion rubles.

VEB will risk the money of pensioners and the budget for the sake of megaprojects for 750 billion rubles.

ALROSA will look in "Crystal"

The plant can be privatized by direct sale.

According to the Accounts Chamber, this will lead to a shortage of budget funds.

The government will help Rusal through Promsvyazbank

Before the announcement of the collection of donations among state employees and pensioners in favor of the victim of US imperialism, the oligarch remains very little.

The Ministry of Finance proposes to lower the threshold of duty-free Internet trading to 500 euros as early as July 1. Earlier, to begin to impose duties on a parcel of more than 500 euros, the government was going to start on January 1, 2019.

The government's pocket is a quarter full

Three quarters of the government's reserve fund for 2018 has already been spent.

Scandal and money: Americans and the British are buying up Russian debts

The demand for new Russian Eurobonds almost doubled the supply - 7 billion dollars against 4 billion dollars. In placement, a large proportion fell to investors from Britain and the US, despite the negative information background, the Finance Ministry said.

Roskosmos fulfilled the budget in 2017 worst of all among revenue administrators: the treasury missed from the state corporation 42.8 billion rubles. - 82% of the plan. Earlier, the Kremlin was criticized by Roskosmos for its inability to earn money.

Why Peter Fradkov will head Promsvyazbank

The officials explained the new appointment of the son of the former prime minister.

The budget deficit of the Russian Federation in 2017 was more than two times lower than in 2016 - 1.336 trillion rubles against almost 3 trillion rubles.

Increased raw materials allowed the Russian Federation in January-November to earn a third more than the same period in 2016.

The government devastated the Reserve Fund

In December, the government spent all the resources of the Reserve Fund. More than 1 trillion rubles. was aimed at covering the budget deficit. In 2018, the deficit will be financed from the funds of the NWF.

The defense banks came up with a security against new sanctions

To save banks working with OPK from a new wave of sanctions pressure, the authorities are considering the possibility of creating a cash management center under the Treasury. According to experts, this will only remove some of the risks.

Russian ruble convertibility may be limited during the crisis

Obligatory sale of foreign exchange earnings, purchase of currency with the permission of the authorities, a special account for certain operations: the right to impose such measures is requested by the government and the Central Bank of the Ministry of Finance.

Alexey Kudrin urged to prepare for the inevitable increase in taxes

The Russian authorities intend to take the Russians to the cleaners.

The privatization of Rosneft was paid by the Russian government

The budget profit from the sale of 19.5% of Rosneft is exceeded by the tax benefits for the oil company by 700 billion rubles.