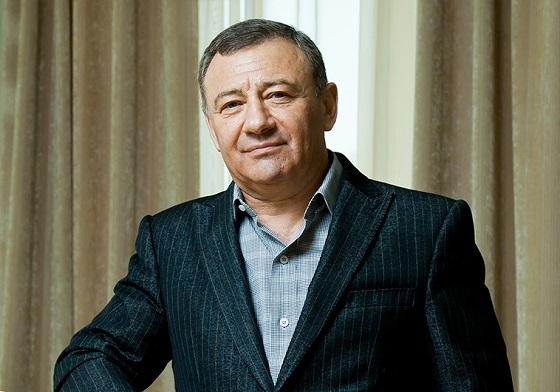 Arkady Romanovitch Rotenberg (born December 15, 1951 in Leningrad) is a Russian businessman and oligarch. He is co-owner (with his brother Boris Rotenberg) of the SGM (Stroygazmontazh) group, the largest construction company for gas pipelines and electrical power supply lines in Russia. He was listed by Forbes in 621st place among the world's wealthiest persons in 2014. He is considered a close confidant of president Vladimir Putin. As of January 2016, Forbes estimates his fortune at $1.26 billion.

Rotenberg is the president of the Hockey Club Dynamo Moscow. In 2013 he became a member of the committee of the International Judo Federation. In 2013 Rotenberg became the chairman of the Enlightenment Publishing House (ru), which had once been the biggest supplier for textbooks in the Soviet Union.

From Kerimov to Potanin: 10 billionaires who received the most cash in 2016

Sale of assets and dividends earned them about $12.4 billion of revenues in 2016.

"The bank of oligarchs" has actually lost one oligarch.

How loser Prokhorov was milked: from trickster Vladimir Yakovlev to rogue Derk Sauer

The oligarch's brain was replaced by friendship with Valentin Yumashev.

According to RBC, the owner of Solvers Group Oleg Malis sued the founder of Svyaznoy Maxim Nogotkov.

Svyaznoy turned out to have new ties

The assets of the group can be acquired by Musa Bazhaev's structures.

Having lost the Svyaznoy chain, Maxim Nogotkov is trying to prevent the reorganization of Svyaznoy Bank

The businessman is negotiating the sale of this business.

Negotiations to merge the financial assets of Onexim Group owned by Mikhail Prokhorov (no. 10 in the ranking of 200 richest businessmen of Russia according to Forbes, with the personal fortune of $ 3 billion) and Svyaznoy Group of Maxim Nogotkov (no. 82; with the fortune of $1.3 billion ) into a holding company have been suspended indefinitely.