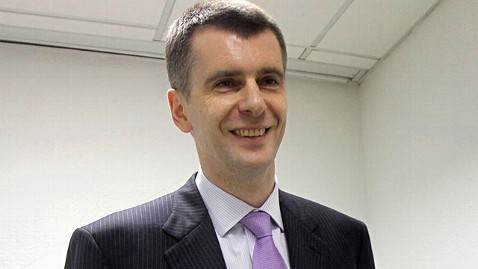 Mikhail Dmitrievitch Prokhorov (born 3 May 1965) is a Russian billionaire, politician, and owner of the American basketball team the Brooklyn Nets. After graduating from the Moscow Finance Institute, he worked in the financial sector and subsequently went on to become one of Russia's leading industrialists, owning major stakes in multinational corporations in the precious metals sector. While he was running Norilsk Nickel, the company became the world's largest producer of nickel and palladium. He is the former chairman of Polyus Gold, Russia's largest gold producer, and the former President of Onexim Group. He resigned both positions to enter politics in June 2011.

In December 2011, Prokhorov capped a year of higher-profile political activity in Russia with the December declaration that he would run as an independent candidate in the 2012 Russian presidential election. He was third in the voting, amassing 7.94% of the total vote. In June 2012 he declared the establishment of the new Russian political party called the “Party of Civic Platform”. As of 2017, Forbes esitmates his wealth at $8.9 billion.