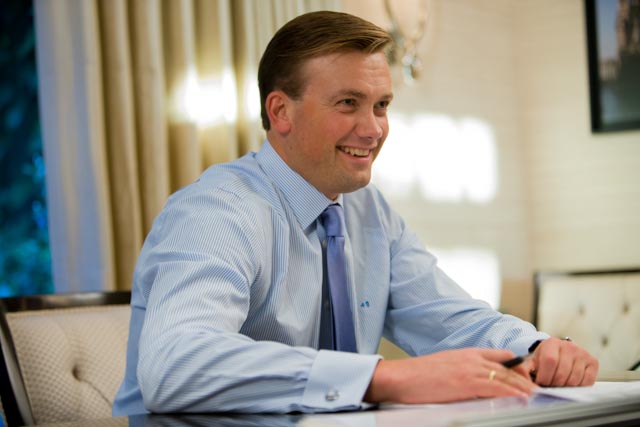 Andrey Yakunin (born 1975) is a London-based businessman, chairman of the National Alternative Investment Management Association (NAIMA) in Russia, and the co-founder of VIY Management.

Andrey Yakunin is the son of Vladimir Yakunin, the former head of Russian Railways and an old friend of Vladimir Putin. Andrey Yakunin lives in Hampstead, north London, where his son, Igor, attended the exclusive Highgate School.

Yakunin runs VIY Management, a private equity and real estate investment company, which he founded in 2006 with British, Israeli-born, investor Yair Ziv. The company facilitates foreign investment in Russia and is pursuing a plan to build hotels in Russia. Yakunin is also participating via VIYM in the construction of houses in St. Petersburg and in 2014 acquired Russian chocolatier French Kiss.

Vladimir Yevtushenkov is ashamed to make money on VIP-guests

The hotel chain Cosmos Hotel Group of the main owner of AFK Sistema Vladimir Yevtushenkov announces expansion, while the business does not bring big profit to the billionaire.

Yakunin's son ate too much chocolate

The foundation of the son of the former president of Russian Railways, Andrei Yakunin, is leaving the business of French Kiss boutiques selling premium chocolate.

Vladimir Evtushenkov can sell hotels in nine cities of Russia

AFK Sistema intends to sell the hotels after the World Cup in football. This will allow you to collect revenues from the tourist flow, and then get rid of assets.

The journey of a member of the global super-rich often traverses three main stages, as he (these are pretty much all men) moves from a position of power at home to a life of wealth and luxury abroad.

Everything acquired by hard work

Why the former head of the Russian Railways Vladimir Yakunin found himself in the hotspot with the British press?

Last year it became known that the eldest son of Vladimir Yakunin Andrew was a British citizen. Life.ru found out that useful citizenship was obtained by his younger brother, too, 37-year-old Viktor. Viktor Yakunin himself told Life that he had become an IT-investor and invested money in a game studio, and got a second passport for convenience.

British The Sunday Times of London reported about a mansion, which is owned by the son of Vladimir Yakunin, the former head of Russian Railways. Representatives of Andrey Yakunin confirmed to RBC, that he owns this property

Russian Railways and Son: how Andrey Yakunin's business was built up

Over 12 years of Vladimir Yakunin's work in Russian Railways, his son Andrey has become a major employer: his VIY Management fund manages assets worth $400 million. RBC recalls which of VIYM projects can be linked to Russian Railways.

Sanctions against the fathers help the children.

How relatives and former wives of state company managers do business

Income declarations of state companies managers were not shocking: they have a usual ncome for the managers of this level. However, the declarations tell nothing about the benefits received by their relatives.

The foundation founded by the son of the president of Russian Railways, Vladimir Yakunin, bought a stake in the production of centrifugal cast pipes, which are used in metallurgy.