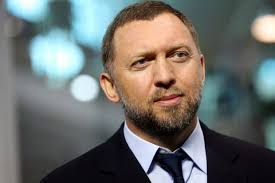 Deripaska Oleg Vladimirovich (born January 2, 1968, Dzerzhinsk, Gorky region, RSFSR, USSR) is a Russian businessman, billionaire, chairman of the supervisory board (in 2009-2012 he is the general director) and the only beneficial owner of the company Basic Element. President, Member of the Board of Directors of United Company Rusal, President of En + Group. Former Chairman of the Board of Directors of the Russian Aluminum Company (2000-2007), former President of the Siberian Aluminum Company (1997-2001), former Director General of the Sayanogorsk Aluminum Plant (1994-1997).

In 2008 he was named the richest Russian. In the same year, in the world ranking of billionaires by the version of Forbes magazine held 9th place (with a fortune of 28 billion US dollars). According to data for 2016, he held 41st place among Russia's billionaires and 854th place in the list of billionaires according to Forbes magazine (state for the summer of 2016 - $ 3.3 billion). In the Forbes rating, "200 richest businessmen of Russia" in 2017 took the 23rd place with a capital of 5.1 billion dollars.

On April 6, 2018, the US imposed sanctions against 24 Russians, including businessmen and high-ranking officials on the Kremlin list. In total, 38 legal entities and individuals were subject to restrictions. Among them was Oleg Deripaska. April 6, in just one day, Oleg Deripaska lost 957 million dollars (due to the fall of shares of his controlled company En +, Rusal, GAZ). At the end of April 2018, the US Treasury announced that it would lift sanctions against Rusal and other companies, if Oleg Deripaska left them as a shareholder before October 2018.

His wife is Polina Deripaska (Yumasheva). Business partner Deripaska Roman Abramovich introduced him to Valentin Yumashev. In 2001, Deripaska married the daughter of Yumashev Polina. Eighteen months after this marriage, Yumashev himself married Tatyana Dyachenko, daughter of Boris Yeltsin, which made Polina the offspring of Yeltsin, and Deripaska, a member of the Boris Yeltsin family. Polina Deripaska is chairman of the board of directors of the publishing company Forward Media Group. He brings up two children from Oleg Deripaska - Peter (born in 2001) and Mary (born in 2003). In the autumn of 2017, Russian media published information about the possible divorce of Oleg Deripaska with his wife.

How Russian oligarchs are dispossessed.

Deripaska needs to be silent

Deripaska unsuccessfully tried to refute an article by the Finnish magazine Mega about the withdrawal of funds through charitable foundations.

UC Rusa announced "obvious problems" with control over the work of Norilsk Nickel. This is how the company responded to Potanin's words that the shareholder agreement with UC Rusal had turned into a "rudiment" and an instrument of pressure.

The main owner of Norilsk Nickel considers the current shareholder agreement with Rusal to be a "rudiment".

Deripaska will leave GAZ in Volkswagen

Oleg Deripaska's farewell to the GAZ group is coming to an end.

GAZ must part with Deripaska to work in the USA

The US Treasury demanded that the GAZ group provide it with reports once a quarter, as well as remove Oleg Deripaska from making decisions. If these conditions are met, the group will be able to continue working with suppliers and contractors.

UC Rusal, founded by Oleg Deripaska, demanded that the board of directors of Norilsk Nickel and Vladimir Potanin change management due to accidents. Deripaska and Potanin sued for several years because of the shares of the enterprise.

The oligarch once again pushed the payment of huge dividends to Norilsk Nickel, which was opposed by another shareholder Vladimir Potanin.

A search of the British company Terra Services was carried out after the detention of a man who took out from her office 100,000 pounds in cash, Terra disputes searches and seizure of documents.

Ural and a number of other assets of the group were bought by Dmitry Strezhnev.

Oleg Deripaska, who has been suing VEB's ex-head Vladimir Chernukhin for several years in London, has lost an appeal in a lawsuit where $ 95 million was at stake.

On the salary of Oleg Deripaska

According to media reports, the “thunderstorm of the oligarchs”, Deputy Prime Minister Andrei Belousov received a salary in the “Basic Element” of the aluminum baron.

Intelligence services looked into the Cyprus passports of Oleg Deripaska

“Golden passports” for a month pretty dull: the shop where they sell their homeland for 2 million euros is hiding.

Deripaska, Stolyarenko and Bondarenko deprived of citizenship of Cyprus

In addition to the owner of Rusal, former managers of Eurofinance Mosnarbank may also remain without passports.

How they live after a scandal and imprisonment in a Thai prison Nastya Rybka and Alex Leslie.

The oligarch “defeated” the hated English media (The Telegraph, The Times and The Nation) in his favorite court of the Krasnodar Territory.

Russian Deputy Prime Minister Konstantin Chuychenko made friends with Deripaska and is gradually increasing the weight of his government. He is even called among those who could in the future take the chair of the head of the cabinet.

Oleg Deripaska intends to continue protecting his investment in Montenegro and considers the decision of the court, which refused him multimillion compensation, to be erroneous, a representative of the billionaire said. The fact that Deripaska was defeated in the “hundreds of millions of euros” dispute was previously announced by the Montenegrin authorities.

The Montenegrin government has declared victory in a dispute with Russian billionaire Oleg Deripaska, who claimed the illegal expropriation of his investments in this country. Deripaska claimed compensation "for hundreds of millions of euros", but now he must reimburse the legal costs of Montenegro.

Sources Bloomberg and RBC reported on the plans of ex-wife Oleg Deripaska and her father, Valentin Yumashev, to sell shares of En +, which controls UC Rusal. In an interview with RBC, Polina Yumasheva said that “so far” she had not negotiated with anyone.

Why is Oleg Deripaska suing the three largest English-language publications?

One of the largest Russian NPF Socium, previously associated with Oleg Deripaska’s structures, was again at the center of the scandal.

“Independent banks decided to destroy”: Deripaska criticized the Central Bank and the courts

Oleg Deripaska for the first time after getting into the US sanctions list spoke at an international forum. In Vladivostok, the billionaire said that the transformation of the Central Bank into a “mega-regulator” does not justify itself and kills competition and that he does not know a single entrepreneur who is satisfied with the Russian judicial system.

Questionable operations of the shareholder of Transcapitalbank (TEB) and the chairman of its board of directors Olga Gryadova can lead the bank to a crash.

In 2012, the former governor, ex-senator and failed candidate for the presidency of Russia went as ambassador to Belarus.