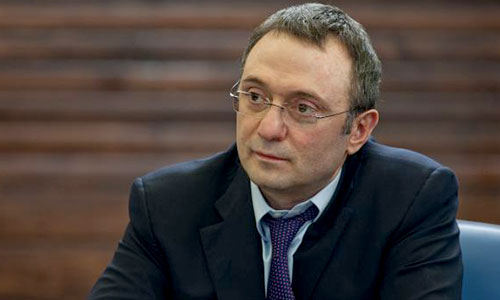 Suleiman Abusaidovich Kerimov, Lezgin, born March 12, 1966 in Derbent, Dagestan, USSR, is a Russian businessman, investor and politician. Since 2008, Kerimov has represented the Republic of Dagestan in the Federation Council of Russia.

Forbes magazine describes Kerimov as one of the most private Russian billionaires, who has not given a single interview over 20 years in business. Moscow Times quoted a former deputy editor of Forbes Magazine Russia Kirill Vishnepolsky as describing Kerimov as a "Russian Warren Buffet" for a similarly astute investment style.

This allowed the senator to appeal to the Basmanny Court of Moscow.

Kerimov pushed Potanin off the pedestal

Thanks to the rise in gold prices, the Kerimov family for the first time was at the top of the Russian list in the Forbes Real-Time rating. With a net worth of $ 24.7 billion, she is ahead of former leader Vladimir Potanin.

The businessman got rich for half a day by 300 million dollars on the growth of the shares of the largest gold miner.

Polyus rakes out its Eurobonds

The company Said and Suleiman Kerimov will spend $ 300 million to buy back part of its debt: foreign investors fear US sanctions against its corporate debt.

Senator from Dagestan and billionaire Suleiman Kerimov today for the first time since November last year appeared at a meeting of the Federation Council. For several months he was under a written undertaking not to leave France, where he was suspected of evading taxes.

The French police removed all charges from Suleiman Kerimov - now he can return to Russia. However, this is unlikely to convince the United States to exclude a billionaire from the sanctions list.

Soon the billionaire will return the passport and the pledged deposit.

Charges of the Nice Public Prosecutor's Office against the Russian senator and businessman are found to be unfounded.

Former general director of En + will deal with mergers and acquisitions

The French will decide what to do with Suleiman Kerimov

In France, the court will hold a meeting on the specifics of the legal procedure in the case of Russian billionaire Suleiman Kerimov. He remains in France under a written undertaking not to leave the country and with a pledge of 40 million euros.

Previously, the Bonum fund, which is associated with Suleiman Kerimov, was called the most likely buyer of the bank "Vozrozhdenie", but what its role in the current deal is unclear.

The losses of Russian billionaires due to sanctions exceeded $ 6 billion

Yesterday Vladimir Putin signed a law on counter-sentences. Forbes estimated how much the richest people of Russia who were under sanctions in April lost, while the Duma and the Kremlin came up with the US response.

Andrey Kostin again felt the attraction to the bank "Vozrozdeniye"

VTB "renewed interest" in the purchase of Bank Vozrozhdenie, said the head of the state bank Andrei Kostin. The main bidder for the purchase is the Bonum Capital fund, associated with Senator Suleiman Kerimov.

According to doctors, the attack can happen again because of the stress experienced by the billionaire under investigation.

Suspected of tax evasion in France, Senator Suleiman Kerimov was hospitalized in Moscow because of "heart rhythm disturbances."

Bonum Capital was associated with Suleiman Kerimov and Oleg Deripaska

The Bonum Capital fund, which claims to purchase the bank "Vozrozhdenie", is associated with Suleiman Kerimov. But the crossings at Bonum were with Oleg Deripaska, it turned out in the American court.

How many Russian oligarchs will lose from US sanctions

The US imposed sanctions against seven Russian businessmen on the Forbes list. All assets of their assets in the US are frozen. Citizens of the United States are forbidden to enter into any business relations with them.

The owner of MosCityGroup owes BTA Bank $ 55 million for the tower "Eurasia" in Moscow City.

The US Treasury recounted Russian officials and businessmen

In the so-called "Kremlin report", in particular, included Medvedev, Peskov, Sechin, Miller, Usmanov and Kerimov. At the same time neither Chubais nor Nabiullina are on the lists.

Andrei Melnichenko followed in the footsteps of Suleiman Kerimov

The owner of Eurochem Andrey Melnichenko may find it unnecessary for his Western "partners".

The oligarch's family company gets rid of unnecessary companions. How much did she pay the compensation?

The French authorities imprisoned the Swiss businessman Alexander Studhalter, recognized Nice-Matin. He, as the investigators believe, was the "front man of Suleiman Kerimov" when buying villas and laundering funds.

While Suleiman Kerimov is sitting under house arrest in France, his son is entering a new investment field in the UK.

Suleiman Kerimov, Yuri Milner and Leonid Blavatnik burned down on investments in Snapchat

As it became known to The Bell, Suleiman Kerimov, who is accused of tax fraud in France, before the IPO of instant messenger Snapchat invested in his actions. For investors, this company has become the main disappointment of the year.