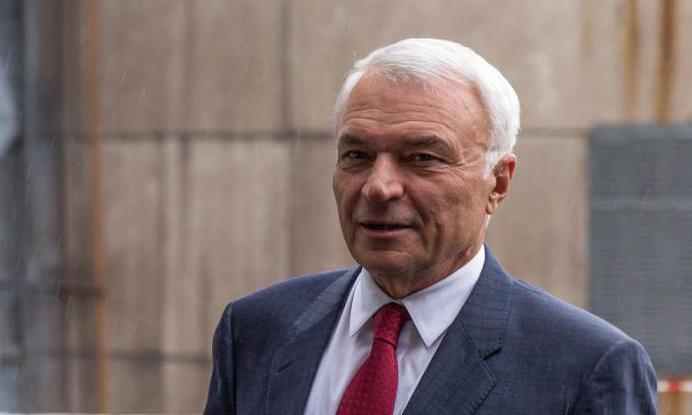 Viktor Rashnikov (born October 13, 1948) is a Russian businessman. He made his fortune (estimated at $8.3 billion in 2017) in the iron and steel industry, being the majority owner of Magnitogorsk Iron & Steel Works (MMK), one of the world’s leading steel producers.

The businessman got his start as a mechanic at the metals outfit back in 1967 and worked his way up. He built his ownership to nearly 100% by buying shares on the market, and he fought off takeover attempts by companies associated with fellow billionaire Iskander Makhmudov. When he faced shortages of iron ore, he and his partners bought one of the biggest iron ore deposits in Russia. In 2007 he took MMK public on the London Stock Exchange and pocketed $1 billion. He stepped down as chief executive of MMK in 2011 after 14 years. His youngest daughter, Olga, joined the board and the strategic planning committee a year later. Most of his fortune is still held in MMK shares.

FAS grabbed the gills of Mordashov, Lisin and Rashnikov

Following Andrei Komarov from ChTPZ Group and Igor Altushkin from the Russian Copper Company, it was the turn of the Magnitogorsk Metallurgical Plant to donate money to the charter capital of the Urals Highway Partnership. The project foresees the construction of a high-speed road Chelyabinsk-Yekaterinburg for 366 billion rubles by 2025.

Rosprirodnadzor estimated damage to the environment caused by MMK

Rosprirodnadzor calculated environmental losses from the activities of the Magnitogorsk Iron and Steel Works (MMK).

Victor Rashnikov was touched for ecology

The Russian Interior Ministry and Rosprirodnadzor fell apart: the departments tirelessly check the Magnitogorsk Iron and Steel Works and its subsidiaries for compliance with environmental legislation. With this in the economy of Viktor Rashnikov, everything is deplorable and therefore it is possible that the latter "red director" is a little de-kulak.

Magnitogorsk can not work in Turkey

MMK postpones the launch of a hot shop at a factory in Turkey.

The owner of the 140-meter yacht Ocean Victory and the main shareholder of MMK could buy a Gulfstream for about $ 60 million.

The products of Severstal, MMK and NLMK are more expensive in Russia than in Europe. It did not cause any questions among the Russian authorities, but the Europeans made themselves alert.

Russian metallurgists have grown rich by more than $1 billion in half a day.

Which Russian oligarch's yacht is longer?

What yachts the Russian oligarchs have.

Melnichenko's mega-yacht was arrested in Gibraltar for a €15.3 million claim

The lawyers of Nobiskrug shipyard have filed a lawsuit against the customer of the yacht for breach of contract.

Shalva Chigirinsky is not a pedophile, but can still become bankrupt

Gref, Yevtushenkov and Rashnikova are united in venture capital investment

Sberbank and Rashnikova company invested 2 billion rubles in the venture capital fund of the AFC "System".

Chigirinsky brothers have nothing to lose but their debt

The crisis in the construction industry in Russia is far from being over; virtually all companies experience serious problems today, not excluding even the big players.

They believe that Viktor Rashnikov and his partner bought their stake in the Moscow City projects at a price below the market.

There's a copy of the Emperor's cabinet and an Olympic-sized swimming pool in the businessman's mansion with a total area of 6,000 square meters.