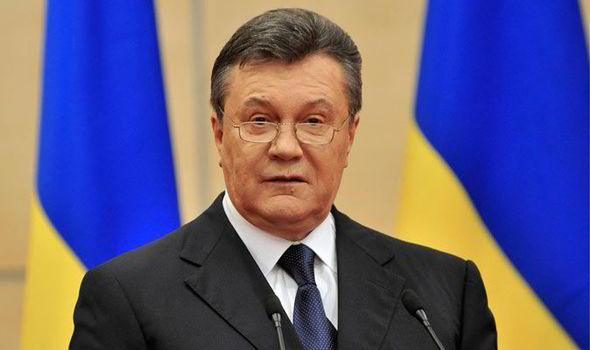 Viktor Fedorovych Yanukovych (born 9 July 1950) is a Ukrainian politician who served as the fourth President of Ukraine from February 2010 until his removal from power in February 2014. He is currently in exile in Russia and wanted by Ukraine for high treason.

Born into the family of a metalworker and a nurse in the eastern town of Yenakiyevo in July 1950, Mr Yanukovych had a troubled childhood. He was twice jailed for violent crimes in his youth - though his official biography states that his convictions were eventually quashed.

Ukrainian Prime Minister Arseniy Yatsenyuk accused Yanukovych and his associates of embezzling some $70 billion in state assets and transferring the funds to foreign banks. Authorities in Switzerland, Austria, and Liechtenstein moved to freeze assets and accounts linked to Yanukovych’s family, and prosecutors in Geneva opened a money-laundering investigation. Yanukovych himself denied the existence of any foreign accounts. In January 2015 Interpol placed the deposed leader on its wanted list in connection with those charges.

Black cash brought out everybody into the open.

Sergey Kurchenko, currently under sanctions, enjoys intellectual property despite the wish of its owners and American justice.

Ukraine is still ruled by money

By agreeing to give immunity to the "gas lobby", Poroshenko has sown the seeds of future counter-revolution.

Yanukovych makes himself at home in St. Petersburg

How the "master of Donbass" Rinat Akhmetov does business in war

Rinat Akhmetov is leading by a wide margin in all rankings of the richest people of Ukraine. None of the financial and industrial groups of the country can not be compared with his business empire, System Capital Management.

RBC Investigation: what Ukrainian oligarch Kurchenko does in Russia

The owner of VETEK Holding Sergey Kurchenko, according to the Ukrainian media is one of the closest persons to the "family" of President Viktor Yanukovych. They both fled from Ukraine at about the same time, and both appeared in Russia.

What happened to Viktor Yanukovych

The Federal Migration Service refused to talk about the fate of the ex-president of Ukraine.

To get into the Verkhovna Rada, the "average" candidate spends a lot of money.

Between the Maidan and the Kremlin: how billionaire Victor Pinchuk has become hostage to politics

The road from the central square of Kiev, Maidan Nezalezhnosti, the main battlefield in recent fights between the the opposition and Berkut, to the estate of billionaire Victor Pinchuk, takes about 40 minutes.

Tymoshenko becomes the most powerful leader in the revolutionary Ukraine

The new Ukrainian government can be actually headed by Yulia Tymoshenko as she satisfied the most powerful forces both inside and outside Ukraine.

Documents on bribery, embezzlement and expenses on special apartments were found near the berth in Mezhigorie