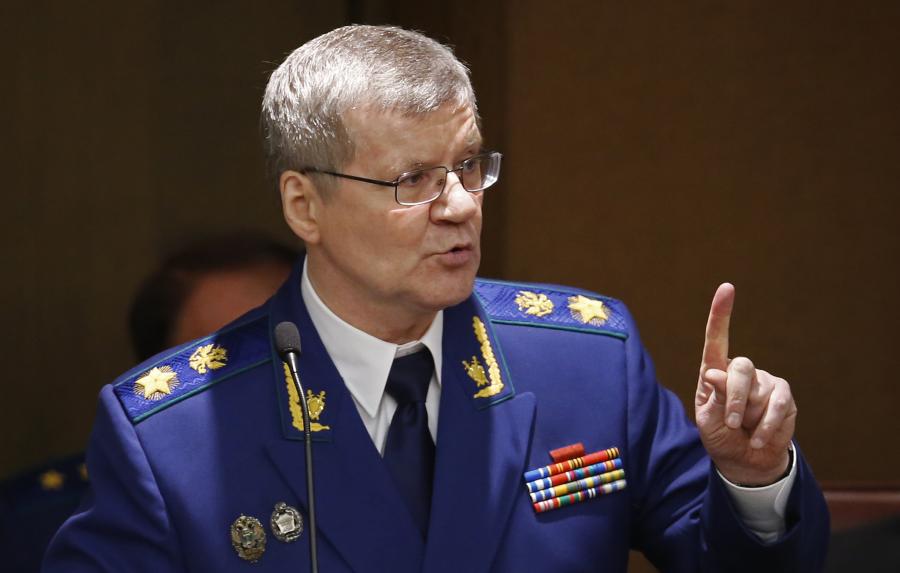 Yury Yakovlevich Chaika (born 21 May 1951) is the current Prosecutor General of Russia, who took his office on 23 June 2006.

On 1 December 2015 Alexei Navalny's Anti-Corruption Foundation (FBK) published a large investigation on Yuri Chaika, and his family. The Report comes with a 40-minute film Chaika. An English version of the film was published on two months later. On 3 February 2016, the group Pussy Riot released a satirical music video titled Chaika, alluding to Navalny's findings.
Among claims in the film are that Mr Chaika’s two sons, Artem and Igor, have used their father’s connections to amass an enormous business empire, including luxury properties in Greece and Switzerland, that may have been acquired illegally. It also claims that business associates of Artem have links to one of Russia’s most infamous gangs, the Tsapoks, who terrorised Russia’s southern town of Kushchevskaya with protection from local police and prosecutors before their arrest in 2013.

Christian State Holy Russia: what is this new deadly organization?

The scandal surrounding the film about the love affair of the heir to the throne of Nicholas II and the Mariinsky Theater ballerina  Matilda Kshesinskaya flared up long before the release of the movie. The main opponents of the film are various Christian organizations in Russia and State Duma deputy Natalya Poklonskaya. They believe that this movie defames the honor of the Romanovs' house and is filmed by the detractors of the church. "Matilda" is slated for release on October 26, 2017, however, some cinemas have already refused to show the film after several incidents of arson of cinemas in other regions. Mikhail Shubin looks into the religious organization "Christian State Holy Russia," which is trying to prevent the distribution of the movie.

The office will receive new powers in the near future.

Investigators and prosecutors cannot find places for themselves

Prosecutor General's Office and the Investigative Committee need 27 billion rubles to provide housing for their officers.

The blogger was trying to involve the media outlets as defendants after they published a response of the General Prosecutor to his investigation film.

The protagonist of the new investigation of Anti-Corruption Foundation is the son of the General Prosecutor, Artyom Chaika.

RBC investigation: who earns on the reconstruction of Moscow

Prosecutor General briefed the military and the Ministry of Industry on the devastating outcome of the audit in the defense industry.