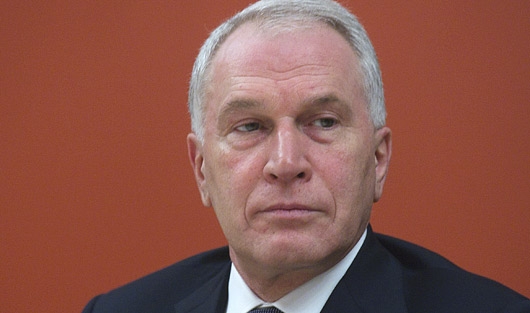 Yury Valentinovich Kovalchuk (born 25 July 1951) is a Russian billionaire businessman and financier who is "reputed to be Vladimir Putin's personal banker".

Throughout the 1990s Yuri Kovalchuck was a good friend of Vladimir Putin, who was then deputy mayor of St. Petersburg. They both had country houses in the Ozero dacha cooperative, and when Putin became president of Russia, many of the cooperative's members' careers improved. After US sanctions against Rossiya Bank, Putin opened salary account in his bank. According to media reports, Putin's daughter Katerina Tikhonova got married at Kovalchuk's ski resort in 2013.

The May 2008 issue of Russian Forbes listed him for the first time in its Golden Hundred of Russia's richest, calling him and another new entrant to the List, Gennady Timchenko, "good acquaintances of Vladimir Putin." The magazine placed him at number 53 on the Russians-only list, with an estimated fortune of $1.9 billion.

The former athlete earns almost 1 million rubles a day in the holding of a friend of Putin.

Kovalchuk opened his mouth on Channel One

The President signed a decree allowing the government to reduce its stake in Channel One below 51%. Control can be obtained by private shareholders, the largest of which is Yuri Kovalchuk's National Media Group.

In the luxurious residence on Cape Aya, which is associated with Yuri Kovalchuk and Valentina Matvienko, a berth for hundred-meter yachts appeared. And off the coast of Crimea for the first time was seen the yacht Rahil, attributed to Arkady Rotenberg.

Arkady Rotenberg, Yuri Kovalchuk and Nikolai Shamalov: Crimea is theirs

How Crimea became a profitable business for Putin’s friends.

Bank of Kovalchuk's and Timchenko's covet the Crimean "Inkerman"

Kurchatov Institute will build an industrial park for the Defense Ministry

For the institute this project can become the first in a series of contracts of public-private partnership.

Whose protection are Rotenberg and Kovalchuk looking for?

A distant relative of the president together with the contractor of Russian Railways and the shareholder of the Bank of Russia want to build a racing track near St. Petersburg worth 11 billion rubles.

President of the National Media Group, Kirill Kovalchuk, came under US sanctions. However, it shouldn't affect his partnership with the American holding Discovery and Turner.

The people and government of Russia cannot do anything with Rosneftegaz.

The owner of Russia Bank, Yuri Kovalchuk, and asset manager of the bank Dmitry Mansurov "settled" in the same apartment.

Simferopol Airport came under the control of Kovalchuk and his partner

Crimean authorities handed over control of the airport of Simferopol to Russia Bank owned by Yuri Kovalchuk and his partner. Private investors will be able to qualify for airport revenues only when finish building a new terminal, a local official said.

RBC investigation: who settled near the presidential residence in Valdai

Many people from the Putin's antuourage have settled next to the state residence on Lake Valdai in recent years. RBC found out who owns the land in Valdai and who neighbours the President there.

Another millionaire friend of Vladimir Putin was found

Companies belonging to the godfather of the Russian president's daughter, Sergey Roldugin, owned a 20% stake in Celler Vi.

Hitting the inner circle: how Putin's friends suffered from sanctions

On March 20, 2014 the US government first imposed personal sanctions against Russian businessmen and top managers of state-owned companies from the Russian President Vladimir Putin's entourage.

Toll roads in Russia are the most expensive in Europe

The maximum rate in Russia is 25 rubles/km, while in Italy in comparable road sections it is twice lower.

Gymnastics of Channel One: sanctions intefered with the launch of a show with Alina Kabaeva

BBC Worldwide has refused to sell a license for Tumble show to the companies co-owned by Arkady Rotenberg and Yuri Kovalchuk.

Among the shareholders of these banks are the members of Putin's inner circle, reminds the WSJ.

Peter Hervey may soon acquire the assets of Sanoma Independent Media publishing house for resale to Gazprom-Media Holding or the National Media Group.

She will head the board of the National Media Group.