The proceeds - up to 30 billion rubles - they offer to send to support the industry.

The authorized representative for entrepreneurs' rights, the chairman of the council of the Union of wine growers and winemakers of Russia Boris Titov, whose family belongs to one of the largest wine producers - Abrau-Dyurso, appealed to Russian President Vladimir Putin with proposals for the development of Russian winemaking. This was reported to Vedomosti by a man close to one of the winemaking companies and confirmed by Titov himself. "Vedomosti" got acquainted with the text of the letter. May 24, Putin wrote on it, "Patrushev DN (. Dmitry Patrushev - Minister of Agriculture -" Vedomosti ") and Belousov AR (. Andrei Belousov - Assistant to the President -" Vedomosti ") to consider and report back."

For the development of domestic winemaking, it is necessary to reduce competition with cheap imported wines and increase support, Titov writes. Now winemakers receive from the state annually about 1.5 billion rubles. But, according to Titov, it takes an order of magnitude more: to meet targets for buying land, planting vineyards, investing in production and infrastructure, etc. will require at least 50 billion rubles. annually.

Titov already knows where to find most of the necessary funds. He proposes to introduce a special fee for the import of wine, wine materials, cognac spirits and, probably, strong alcohol. The amount of the fee is not specified in the letter. It only says that it is possible to collect up to 30 billion rubles.

The collection will not be great, says the president of the Union of Vine Growers and Winemakers Leonid Popovich. Approximately 1 billion bottles of imported alcohol are imported annually into Russia. It turns out, with rough calculations, the collection from the bottle does not exceed 30 rubles. And it is not proposed to introduce it now, but as the viticulture develops and production in the country continues, Popovich continues.

If the fee is imposed, the importers will be forced to include it in their costs and the wine will eventually rise in price, the chairman of the Union of Importers of Alcoholic Products Valery Filatov discusses. A 30 rubles. for a bottle - not at all a small amount, he points out. After all, most of the wine consumed in Russia is sold for about 300 rubles each. for a bottle, says Filatov.

The collection from imports would really help the Russian wine become more competitive, says Vadim Drobiz, CEO of CIFRRA. Similar support works in some European countries, as a result, most of the wines there are cheap - up to 4 euros per bottle. And Russian wines from their own grapes are more expensive. But if you make imports less competitive, Russian manufacturers will not have an incentive to lower prices and improve product quality, Dmitry Zhurkin, the import director of Ladoga, object.

But Anatoly Korneev, vice president of Simple, approves an increase in support for producers: the industry requires large investments and in most winemaking countries it is supported at the state level.

Quality Russian wines are, but they are sold in the category of 500 rubles., And they account for 10-15% of all sales. Their production is small and such a measure is unlikely to support such measures, Filatov said.

In the fight against cheap imports, it is also necessary to strengthen the quality control of imported wines, including control purchases in stores, and the introduction of a minimum price, Titov suggests.

Now there are minimum retail prices for spirits and sparkling wines. A half-liter bottle of vodka should not cost less than 205 rubles, a bottle of sparkling 0,75 liters - no less than 164 rubles. 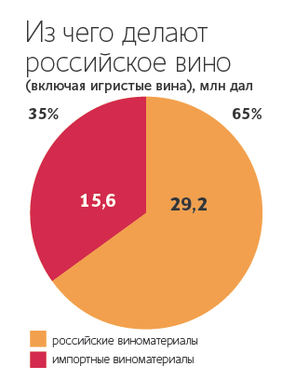 Import is beneficial for winemakers

Domestic wines had a short period of growth when, due to the crisis of 2014, imports fell by a third, says Drobiz. But the restoration of imports began already in mid-2016, he continues. In 2017, wine imports almost reached pre-crisis levels and amounted to 24.4 million decaliters. But the production of Russian wines, on the contrary, fell to the level of 2014 - 32 million decaliters, excluding champagne and sparkling wines.

There are also objective reasons for this: the total area of ​​vineyards in Russia is still small (96,000 hectares, according to the Ministry of Agriculture - Vedomosti), and it takes time to establish stable supplies and uninterrupted production of high quality wine, Korneev notes.

In addition, there are internal problems on the market, says Andrei Grigoriev, general director of the wine company Alma Valley. For example, it is necessary to solve cardinally the issue of importing cheap wine materials that are bottled in Russia. Of them, making wine is much more profitable, and under the guise of Russian wine, in fact, imported products are sold. The second problem is wine drinks, made with the use of flavors and fruit additives. They unreasonably relate to the category of wine production, enjoy preferential excises. If you withdraw them from this category, you can multiply the excise tax on them, reducing competition with them, summarizes Grigoriev.

The Russian wine-making industry has a great potential: vine-growing lands in Russia are characterized by a variety of terroirs, natural and climatic conditions allow producing all types of wine products known in the world, Titov writes. But the Russian wine as a whole still does not have enough authority, which comes with time, believes Drobiz. 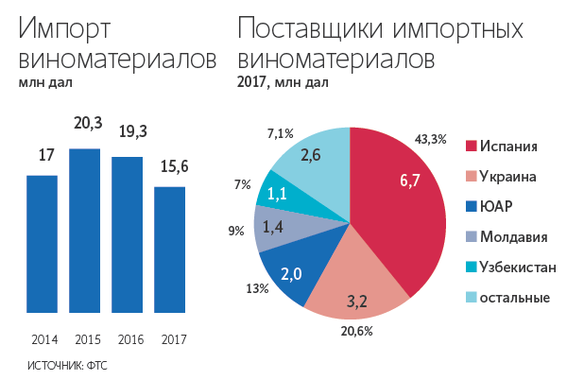 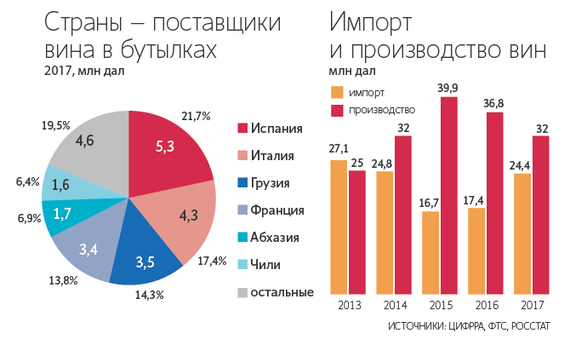