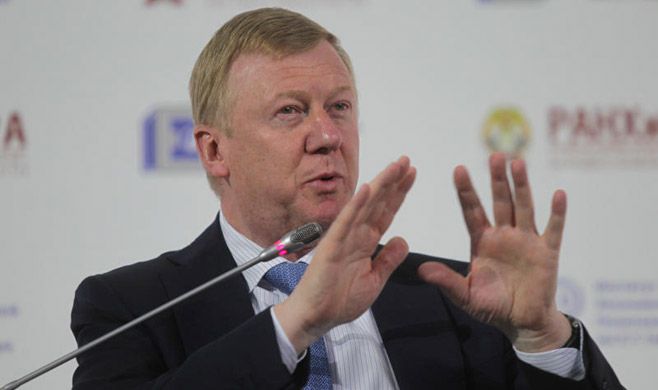 Anatoly Borisovich Chubais (born June 16, 1955) is a Russian politician and businessman who was responsible for privatization in Russia as an influential member of Boris Yeltsin's administration in the early 1990s. During this period, he was a key figure in introducing market economy and the principles of private ownership to Russia after the fall of the Soviet Union.

From 1998 to 2008, he headed the state-owned electrical power monopoly RAO UES. A 2004 survey conducted by PricewaterhouseCoopers and the Financial Times named him the world's 54th most respected business leader. Currently, he is the head of the Russian Nanotechnology Corporation (RUSNANO). He has been a member of the Advisory Council for JPMorgan Chase since September 2008 and a member of global board of advisers at the Council on Foreign Relations (CFR) since October 2012.

The former president of A1 will get a controlling stake in a major influenza vaccine manufacturer.

Top manager Andrey Rappoport deceived Anatoly Chubais, but stumbled on trying to do the same with Igor Sechin.

How Anatoly Chubais was left without a mansion in Peredelki village

As Forbes found out, the manager of the Chubais's former family office registered his real estate worth around $40 million using his own name.

As Forbes found out, head of Rosnano Management Company, Anatoly Chubais, earned an income of more than 1 billion rubles in 2015. This is, as a minimum, 5 times bigger than his annual income for the previous 5 years.

Leonid Melamed's case as a mirror of manners in the Russian business.

Illegal bonus: why the former head of RusHydro was detained

Investigative Committee opened a criminal case against former RusHydro head Yevgeny Dod, suspecting him of theft of 73.2 million rubles. The protege of Anatoly Chubais and Igor Sechin spoiled relations with those who supported him, say the managers familiar with the situation.

Chubais sets up another estate

Anatoly Chubais, who's been blamed for everything since Yeltsin times, sheds no tears over the lack of national love, and is busily building a dacha to take rest at during the retirement which is not too far away.

Member of the Forbes list, the former economy minister and ex-head of E4 Group...Fearing prosecution from the Russian government, five top managers, who at various times were been associated with Rosnano and Anatoly Chubais, left the country.

Two comrades were serving: why billionaires Vekselberg and Abizov quarreled

The owner of Renova and the Minister for Open Government are suing each other in the Virgin Islands for $ 500 million. Who owes whom, and how much?

Sanctions against the fathers help the children.

Chubais failed with the property development and elite dentistry

OOO Strategy created by Anatoly Chubais stopped the construction of a cottage settlement with the working title Iksha Land and is suing the contractors.

Top managers of Rosnano are suspected of embezzlement

Companions of Anatoly Chubais became defendants in a criminal case.

The Cyprus foundation of Rosnano involved in a criminal case

Investigators suspect that the management of Nanoenergo Fund Limited of illegal cashout of $ 90 million from the company.

Prosecutors find out whether the actions of Anatoly Chubais and his management had any criminal elements.