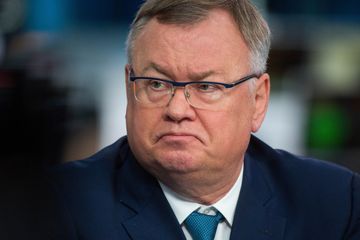 Kostin graduated with honors in 1979 from Moscow State University with a degree in International Economics (major: Teaching political economy). In 2001 received a PhD in Economics for a dissertation entitled "Globalisation: A Form of Internationalisation of the Economy".

He is one of the most active representatives of the Russian banking sector and is a frequent guest on CNBC, Fox News, CNN, BBC and Bloomberg TV-channel. He has three times participated in the Charlie Rose show on Bloomberg television, as well as the Hard Talk programme on BBC. He has been attending the World Economic Forum (Davos, Switzerland) since 1996.

Nailya Asker-zade flew off on her plane

The Bombardier Global 6000 business jet, which, according to the Anti-Corruption Foundation, was regularly used by TV presenter Naila Asker-zade, is put up for sale.

Kostin was left under sanctions

The European Court found the introduction of EU sanctions against VTB justified. The bank fell under restrictions in August 2014, after which it repeatedly tried to appeal the court decision.

That allows Kostin to steadily lead VTB for 18 years.

Andrei Kostin has a vested interest in Lukoil diamonds

RSPP asks Mishustin to intervene and withdraw the FAS lawsuit.

The developer will cease to exist.

VTB takes the toxic assets of the developer.

Gref vs. Kostin - whose bank will be cooler

There is competition between the two largest Russian state-owned banks. Rather, between their leaders - German Gref and Andrei Kostin.

The wife of the head of VTB Natalia Gordeeva owns an apartment worth more than a billion rubles in the elite Moscow residential complex "Grenade Palace".

Patriarch Kirill used the VTB offshore jet as a workhorse

The list of aircraft passengers from Andrey Kostin was replenished by clergy and plenipotentiaries.

Svetlana Medvedeva arranged a ride on the state business jet

The prime minister’s wife found a personal plane that could not afford either for her or for Medvedev himself.

Naila Asker-Zade received a plane, yacht and a beautiful life from the head of VTB Bank Andrei Kostin

Favorable connection of the journalist of the state VGTRK with the state VTB.

Journalist Naila Asker-zadeh reacted to the investigation of the Anti-Corruption Fund dedicated to her, comparing it with “native advertising”.

The head of VTB may drag Russia into an international scandal.

The traditional welcome for the guests of the Russia Calling! Forum, VTB head Andrei Kostin and top managers of the group opened Joan Rowling in the characters of the novel’s novels, in the story their main opponent is Dollar-de-Mort.

VTB became the main creditor of Mechel - almost 50 billion rubles were transferred to it from Sberbank.

Andrey Kostin is under an umbrella

What furnishes the apartment with the head of VTB.

How to kill a VTB bank

Do not ask whose money the banking elite has fun. She does it with your money.

The head of VTB funded his friend Alexander Vinokurov through a deal with AFK Sistema.

What does a woman want: wife of Andrei Kostin gets a private reservoir

The mansion, standing on the lands of the wife of Andrei Kostin, is not on the cadastre.

Andrei Kostin advised Mikhail Zadornov not to wave his arms

VTB and one of its largest shareholders, Otkritie Bank, have diverged in estimates of dividends for 2018. Zadornov believes that the bank could pay dividends above the calculations made. Kostin called the dividend issue "resolved."

Andrei Kostin did not climb the tower

VTB denied information about participation in the negotiations on the construction of the Trump Tower skyscraper in Moscow. Earlier, the former partner of Donald Trump, Felix Sayter, who oversaw the project, claimed that he had enlisted the support of the “chairman” of the state bank.

Sistema paid for its share in Intourist is 20 times cheaper than the initial price.

Gref Kostin fight because of the asset "Rossety"