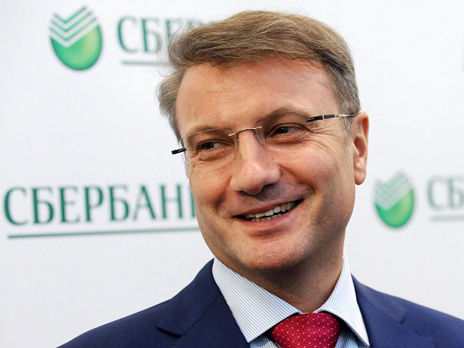 Herman Oskarovich Gref (born February 8, 1964) is a Russian statesman and top manager. He was the Minister of Economics and Trade of Russia from May 2000 to September 2007. He currently is the CEO and Chairman of the Executive Board of the largest Russian bank Sberbank.

Gref was first appointed as Minister of the newly formed Ministry of Economic Development and Trade on May 18, 2000 and was reappointed to the position in the succeeding Cabinet in 2004.

Herman Gref was a major advocate of Russia’s joining the World Trade Organisation.[4][5] He is also responsible for creation of the Stabilisation Fund. He was considered as one of the liberal reformers in Vladimir Putin's administration of the early and mid-2000s, besides Alexey Kudrin.

Herman Gref is member of boards and supervisory boards of a number of companies, including Yandex.

Why does Gref need an Indian confessor

Why German Gref is the most eccentric businessman.

German Gref tries on the layouts

What will change in the life of German Gref after the sale of a controlling stake in Sberbank.

Gref vs. Kostin - whose bank will be cooler

There is competition between the two largest Russian state-owned banks. Rather, between their leaders - German Gref and Andrei Kostin.

What German Gref did not share with Elvira Nabiullina

What is the use of Sberbank confrontation with the Bank of Russia.

The Arbitration Court of the Tyumen region declared the Antipinsky oil refinery bankrupt, by court decision, a bankruptcy proceedings were opened for six months.

The Board of Directors of Rambler Group asked to terminate the criminal case on the rights to Nginx.

Alexander Mamut got into streaming

The Rambler Group is demanding record compensation from the American Twitch service.

But he has no complaints against German Gref.

From Dyukov to Savelyev: the list of gold directors has been updated

Forbes introduced a third rating of capitalist directors. This year, for the first time, the president of Sberbank German Gref and the general director of Aeroflot Vitaly Savelyev got into it.

VTB became the main creditor of Mechel - almost 50 billion rubles were transferred to it from Sberbank.

Suspected of embezzlement of Sberbank customer data, he was detained as an employee of a collection agency.

German Gref turned out to be a shark

The head of the Central Bank Elvira Nabiullina reprimanded the head of Sberbank for the extreme volumes of absorption of IT-companies.

German Gref wants to control people with the help of Kabbalah

In a scandalous video, the head of Sberbank spoke about the thousand-year-old sacred teaching and the Russian masses.

In the theft of customer information caught one of the employees of Sberbank.

Sberbank handed over its customers to scammers

German Gref’s 60 million credit card data has hit the black market. This is the largest banking leak in the history of Russia.

The founder of the Antipinsky Oil Refinery explained his criminal prosecution.

German Gref could not defeat Alexey Miller in waste

State companies and regional budgets have spent more than 1.5 billion rubles to participate in the St. Petersburg Economic Forum.

Last Friday, at a meeting of shareholders, German Gref was re-elected head of Sberbank. This period will be the fourth time for longtime acquaintance of Vladimir Putin.

Rambler found his niche in the pocket of German Gref

The history of Rambler - from the largest company of the Russian Internet to the Sberbank showcase.

Herman Gref made the planes dry

As Sberbank wanted to get from state-owned enterprises several times more than it gave.

After trying to negotiate the purchase of Yandex, which has so far failed, Sberbank decided to invest in the Rambler Group burdened with debts.

Sberbank and UAE banking group Emirates NBD revised the amount of the transaction for the sale of the Turkish subsidiary of a Russian bank - Denizbank AS In dollars, the price fell by more than $ 400 million. Seven years ago, Sberbank paid $ 750 million more for the asset compared to the agreed transaction price.

The differences of the head of Sberbank German Gref with the leadership of the Central Bank are discussed both in the Kremlin and in the government.

Russian banks are holding abroad 182 billion dollars in the form of claims to foreign residents, RBC calculated on the basis of data from the Central Bank. Despite the crackdown in Cyprus, which affected Russian capital, a fifth of this money is there.

For 25.7 billion rubles, the State Bank has acquired a 10% stake in a friend of Dmitry Mazepin.

Personal data of 420 thousand Sberbank employees became public. The reason for the leak could be the malicious actions of one of the bank employees.

Sberbank put its paws on Yandex

Sberbank is negotiating the purchase of a large stake in Yandex - up to 30% of the capital. The cost of the transaction can be up to 3.8 billion dollars.