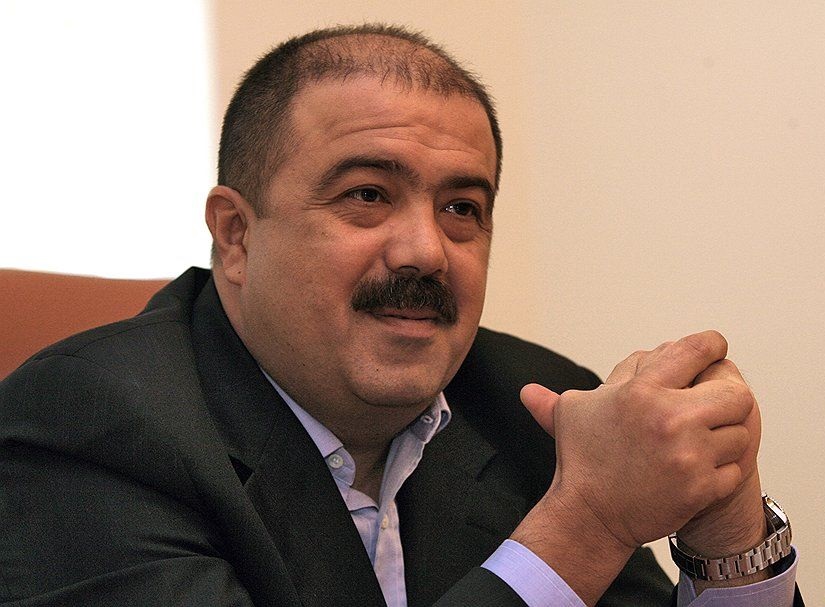 Iskander Makhmudov (born December 5, 1963) is an Uzbek-born Russian businessman and philanthropist. According to Forbes Magazine, Makhmudov is the 22nd wealthiest person in Russia. Forbes reported his net worth at $6.5 billion as of June 22, 2014.

Iskander Makhmudov is the main owner of copper producer Urals Mining and Metals Company (UMMC, also known as UGMK), which has controlling stakes in more than 300 companies in nine regions of Russia. He is also a shareholder in Transmashholding, Russia's largest maker of locomotives and rail equipment.

Born in Bukhara, Uzbekistan, he lived in Tashkent and graduated from a local university with a degree in oriental studies. In 2009, Spanish authorities named him in a money laundering case, which they handed over to the Russian attorney general's office for further investigation. In March 2012, the case, which also implicates billionaire Oleg Deripaska, was sent to the investigative department of the ministry of internal affairs. The investigation remains open, but no findings have been announced.

Iskander Makhmudov and Andrei Bokarev staged a merger of their assets

Transmashholding (TMH) and Lokotech-Service announced a merger. The control over the new company will be retained by the previous owners - Makhmudov and Bokarev, but the share of the French Alstom in TMH will decrease to 20%.

The Russian company plans to send tourists to space for $ 200,000

Its investor is considered the billionaire Iskander Makhmudov.

The largest supplier of Russian Railways and partner of the scandalous Iskander Makhmudov for Transmashholding built a palace on Rublevka on the lands of the forest fund.

Enterprises of Iskander Makhmudov have increased production of copper sheets by 40%, but this is still not enough. 70% of this kind of products in the Russian Federation are still imports.

Another 26% of the shares of "Kalashnikov" came to Alexey Krivoruchko

The transaction cost was 1.5 billion rubles. Under the formal control of the chairman, almost 75% of the arms group's shares turned out to be.

The owners of the Copper Mountain

Russian oligarch Usmanov's copper reserve: what is Udokan and why develop it?

Igor Altushkin will flood Chelyabinsk with waste to get copper

Local residents are actively protesting, but they only hope that the plant project will turn out to be economically useless. This is the only thing that will help them not to live at the waste dump.

Rostec may sell the manufacturer of Armata

Rostec began searching for an investor for Uralvagonzavod.

How's Navalny's movie "He's not Dimon" is associated with Iskander Makhmudov, and when Alisher Usmanov will finally give copper to the country.

The publisher of Profil magazine was arrested for blackmailing Ziyavudin Magomedov

At the Povarskaya Street in the Tai Tai restaurant was arrested the general director of LLC IDM-Format Yevgeny Feldman for extortion of 200 thousand dollars from the Summa Group, of which Ziyavudin Magomedov is the main owner.

Dmitry Pumpyansky went on the offensive against UMMC

The businessman in an attempt to expand its influence in the Urals, faced the general director of UMMC Andrey Kozitsyn.

The head of Rosneft has started a project to launder billions of dollars in unnecessary construction of metallurgical plant in the Primorsky Territory.

The oligarch sets up the rules for himself, instead of the law.

Underground Wars: how billionaires fight for the contracts of the Moscow metro

Iskander Makhmudov and Andrey Bokarev were called the "Kings of public procurement" by Forbes in 2015. How did they win the largest of their contracts?

Iskander Makhmudov: how an engineer-translator became a billionaire

He took over copper and coal in battles of the 90s, built a monopoly around the monopoly of Russian Railways in the 2000s and encircled Moscow in the 2010s: his raider past did not prevent him from succeeding in the system of state capitalism.

The state monopoly has approved the sale of 25% of Aeroexpress having spent 46 billion rubles on its development. Why sell an asset with the value increased ten times?