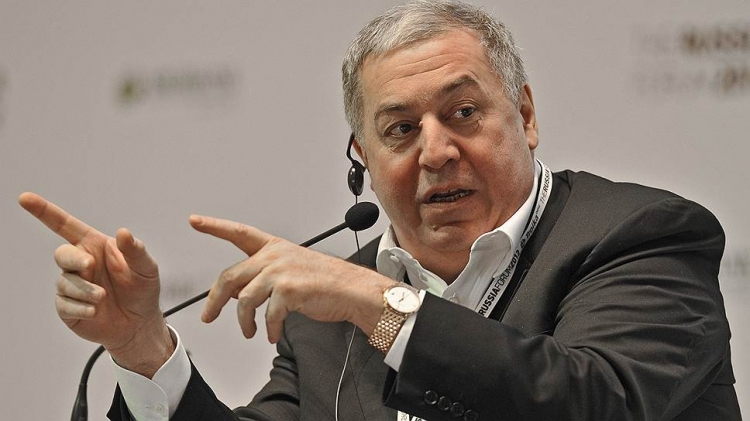 Mikhail Safarbekovich Gutseriev (born 9 March 1958) is a Russian entrepreneur, businessman and poet.
He is the owner of "Russneft", NK "Neftisa", OAO "Russian Coal", ZAO "Mospromstroy" and also GCM Global Energy, a British company, with annual revenue of $1 billion controlling large oil assets in Kazakhstan and Azerbaijan. Gutseriev also owns large assets in real estate including the "National" Hotel and luxury shopping centres such as Petrovskiy, Smolenskiy and Novinskiy Passage. In 2012. Gutseriev began to invest into the media business, and has acquired seven radio stations thus far.
According to Forbes, Gutseriev has a personal fortune of $6.2 billion as of March 2016, up from $2.4 billion the previous year.

In late 2006 he was accused of violating terms of his oil license and failing to pay taxes. After denying the charges, he sold Russneft to billionaire Oleg Deripaska for $2.8 billion and moved to London. When the charges were dropped in 2010, Gutseriev returned to Russia and bought back Russneft. Gutseriev writes lyrics for songs performed by famous Russian singers.

The “Trust” bank undergoing the reorganization procedure received almost 25% of the Belarusian potash project of Mikhail Gutseriev “Slavkali”. This project was credited by the China Development Bank, and Alexander Lukashenko took part in the commencement ceremony.

The Afipsky Oil Refinery Vladimir Kogan headed the ex-general director of the Krasnodar Oil Refinery, which is part of the Safmar group of Mikhail Gutseriev. Gutseriev - at the final stage of negotiations on the purchase of the plant.

Russneft Mikhail Gutseriev in the next three years, the loss of $ 260 million

Such is the fee for an unsuccessful hedge against falling oil prices - raw materials are becoming more expensive.

FAS will approve the sale of the Russian unit of the German network to the group "Safmar" in the near future.

Gutserievs reduced the share in their financial holding to repay loans

The Gutseriev family reduced the share in the holding company "Safmar Financial Investments", selling in it 15% for 10 billion rubles. The buyers are several large Russian businessmen. The money will go to pay off the loans of the group "Safmar".

The Gutseriev family bought an office in London for £ 18.5 million

The group "Safmar" purchased for 18.5 million pounds office building in London's West End, which houses the headquarters of Zodiak Media. Experts believe that the deal turned out to be beneficial for the Gutseriev family.

EAST Group Alexander Nesis created one of the world's largest freight car manufacturers - the United Railcar Company, but retained only a minority stake in it. After the collapse of the "Moscow banking ring", the shareholders of the HVAC stopped understanding each other.

After buying Media Markt, the group "Safmar" Mikhail Gutseriev controls almost 30% of the domestic market of consumer electronics and household appliances. Now the group has to live up to its expectations for capitalization growth, focusing on improving efficiency, increasing profitability and developing the online sales channel.

The co-owner of the ruined "Binbank" continues to seize retailers of household appliances and electronics in Russia. The goal is to create a mega-collective farm in the retail market, which will then be sold to Russian state-owned banks. For Russian consumers, this means the end of the era of competitive prices.

On the eve of the second wave of the banking crisis, the Central Bank intends to prohibit owners of sanitized banks from traveling outside the Russian Federation. Their assets will also be blocked for the duration of the proceedings. For large oligarchic banks, already sanitized by the Bank of Russia, an exception has been made.

The CBR spent 2.62 trillion rubles on sanation of large banks and could spend another

The Central Bank of the Russian Federation in 2017 spent 2.62 trillion rubles on the rehabilitation of three private banking groups. This was told by the Chairman of the Bank of Russia Elvira Nabiullina. This is five times more than Russia's annual spending on education.

A year after the introduction of anti-Russian sanctions, Metro Group's revenue in Russia fell by 14% (to 3.6 billion euros). In the first half of the current fiscal year, sales decreased from 1.8 to 1.5 billion euros.

The group "Safmar" of the Gutseriev family is ready to purchase "Media Markt" stores in Russia.

The networks of household appliances and electronics "M.Video" and "Eldorado", which are part of the "Safmar" group of Mikhail Gutseriev, are united.

Promsvyaz Capital bought shares from NPFs and immediately sold them to the bank itself.

The newcomer of the rating this year could become Sergey Gordeyev, whom the real estate market players consider the owner of the Columbus shopping center.

In the troubled banks, the retirement savings of Russians have disappeared

In the banks "Opening" and Binbank burned up to 50 billion rubles of retirement savings.

Mikhail Gutseriev will produce potassium in Belarus for China

The head of Russia's richest family has been a frequent guest in Belarus and of the president of the country since 2000.

Russian Central Bank is going to take control over Binbank

Its transfer to the Banking Sector Consolidation Fund can be announced in the coming days.

Binbank is under the observation of the Russian Central Bank

A financial bubble named after Gutseriev-Shishkhanov is ready to burst at any moment.

Atlantis of the Gutseriev-Shishkhanov clan

The business empire of Mikhail Gutseriev and his nephew, Mikhail Shishkhanov, is bursting at the seams. The main problem, the debt burden, cannot be solved.

"I interfere wherever things go badly"

Mikhail Gutseriev talks about seven years of business revival, praises the Central Bank and Elvira Nabiullina and cites his own poems.

Gutseriev's family earned nothing by reselling the shares of M.video

Probably the new owners of the trading network urgently needed to return a bank loan.