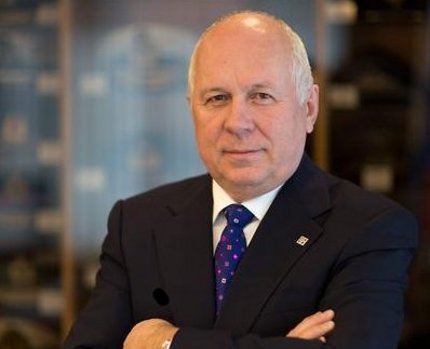 Sergey Viktorovich Chemezov (born August 20, 1952, Cheremkhovo, Soviet Union) is CEO of Rostec Corporation (formerly the Director General of Rosoboronexport), chairman of the Union of Russian Mechanical Engineers, and a lieutenant-general.

Graduated with honors from Irkutsk Institute of National Economy (presently Baikal State University of Economics and Law) in 1975 and then completed his postgraduate education at the Military Academy of the General Staff of the Armed Forces of Russia. Sergey Chemezov has a doctorate in economics and is also a professor and full member of the Military Academy.

On April 28, 2014 he was barred by the Obama administration from entering United States.

How Chemezov's sons make billions from a state corporation.

Sergey Chemezov found a gold mine in the dumps

RT-Invest is planning to build 30 waste incineration plants in Russia. Now the company is building five plants in the suburbs and Kazan for 200 billion rubles.

The family of Sergei Chemezov lives on Rublevka

We continue to talk about the inhabitants of Rublevo-Uspensky highway.

The young grandchildren of the head of Rosoboronexport, Alexander Mikheev, turned out to be the owners of billions of land estates.

The head of Rostec, as the chairman of the board of directors of the potash company, pulls it to the sanctions bottom.

FSB, Rostec and other troubles of Russian business

The Center for Business against Corruption analyzes the problems of businessmen with specific examples.

Sergey Chemezov launched his hand in the state pocket

"Rostec" is trying to get money from the budget for the construction of new aircraft.

Sergey Chemezov asked for money from Vladimir Putin for airplanes

As part of the Black Sea sanatorium of the corporation, the mother-in-law of its general director, Sergey Chemezov, was taken over.

The state corporation has placed a contract for 550 thousand positive publications in the federal media.

A consortium of OCCRP journalists found villas and castles of friends and relatives of the head of Rostec, Sergei Chemezov, in the Spanish town of S'Agaro.

Sergey Chemezov will tie Prometheus to the regions

The created operator of fire-prevention systems first of all is going to strengthen control over trade and business centers. This market is billions of rubles.

The operator of an emergency transportation of the S-400 to China was a company from Petersburg that was connected with Rostec. Claims against 11 billion rubles are brought against her.

Creditor banks are looking for new owners for Elga deposit.

US will deprive Russia of MS-21

The ambitious project of the corporation of Sergey Chemezov may end without reaching the end.

Sergey Chemezov has got himself wings

The proposal to free the enterprises of the military-industrial complex from paying dividends was included in the draft government plan to accelerate investment growth. This is an attempt to neutralize the effect of sanctions and stimulate the production of civilian products.

Over the Russian air export threatened

Rosaviatsiya engaged in certification of vessels has not achieved recognition by foreign aviation authorities, without this no deliveries abroad are possible.

"Natsimbio" will lose the status of a monopolist

"Daughter" of "Rostecha" - the company "Natsimbio" - may lose the status of the only supplier of blood products, because it did not fulfill its obligations to build a plant in Kirov. In this case, finish it in "Microgen"

Alisher Usmanov and Alexander Galitsky will pick up the Russian labeling